Antifragile: Things that Gain from Disorder is the pinnacle of Nassim Nicholas Taleb’s work. In his previous books like Fooled by Randomness or The Black Swan the author always introduces one big idea and complements it with additional volumes.

Antifragile is the summary of these concepts, the world view where all of the big ideas of Taleb are involved and are put into a frame.

My Comment: In Black Swan Taleb writes that an essay is a meditation not a scientific report. It is good to remember his observations when reading Antifragile.

Most of the concepts listed in the book are great ideas that sound compelling but they lack evidence the same way as the concepts & studies they were meant to debunk. 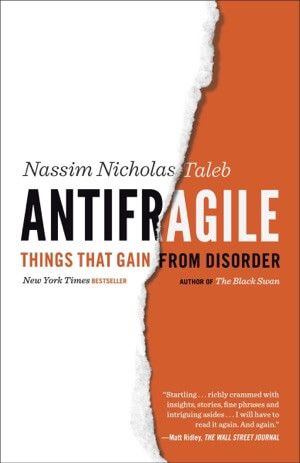 Antifragile: Things that Gain from Disorder

The Definition of Antifragile

Antifragile is not simply robust or stable. Antifragile gets better from shocks and random events.

Antifragile systems are the antidote to Black Swans.

A spectacular example of antifragility is the Hydra from Greek mythology. If you cut off one of the Hydra’s heads then two grow back in return.

Taleb often mentions nature as the biggest antifragile system in the book and evolution as the process of making creatures antifragile at the expense of individual fragility.

Switzerland is also considered one of the most antifragile countries on earth.

We can observe antifragility when we are discussing jobs, decisions, and their consequences in corporate or other settings. Taleb is using an easy to visualize example here: what happens when you punch someone in the face?

If you are a middle manager of a big firm and you punch someone in the face at work or at a conference, then you can guarantee that you will be let go.

Your job is fragile in this regard.

On the other hand, if you are an author or an artist then you can expect totally different consequences. You probably don’t even lose any business, your job will be enacted and even a small scandal can benefit you by driving you extra attention and potentially extra book sales.

Artists' jobs are  antifragile to scandals.

I always ponder how I can use the concepts and takeaways of non-fiction books to make my life better. Taleb makes this easy in Antifragile by introducing the Barbell Strategy.

The Barbell Strategy involves extreme risk aversion and extreme risk-taking at the same time to get the most of both worlds.

While taking medium risk can be a bold move because of measurement errors that can ruin our plans, until then the barbell strategy offers a solution.

It minimizes risk by playing it safe and helps us to get the potential upside of unexpected events by inviting extreme risk-taking to our decisions as well.

Examples of the Barbell Strategy

All elements of a system should be considered. Studying only a select one can lead to wrong conclusions.

"It is the system and its fragility, not events, that must be studied—what physicists call “percolation theory,” in which the properties of the randomness of the terrain are studied, rather than those of a single element of the terrain."

The Need for the Fragility

Though the book mainly paints antifragile as the ultimate state of things, the condition which helps to gain from disorder and survive, Taleb also acknowledges the need of fragility within antifragile systems.

Often the sum of fragile things makes a system antifragile.

For example, the economy needs entrepreneurs and startups even though the possibility of failure pursuing these ventures is high. Fragile startups make the economy antifragile.

Mother nature created the most antifragile system by making sure the antifragile part of it exits the gene pool after a certain type. Randomness and high levels of uncertainty are present in nature and allow the fittest to stay.

In Antifragile: Things that Gain from Disorder the author points out that most of the time, not the best idea survives the test of time, but rather the idea whose holder survives. Individuals and societies with the correct assumptions are more likely to endure.

The focus on people rather than on ideas is present in the economy as well. Investors often invest in founders rather than in ideas. It is safer to be on a jockey with the correct set of assumptions than on a risky horse.

If something is present for a long time (a book that was printed in the last 200 years, a proverb that is cited since the ancient Greeks) then the possibility of it surviving even more time is pretty high. This observation is known as the Lyndie effect.

Time is the ultimate evidence of robustness in complex domains.

Lecturing birds how to fly

Taleb calls the descriptive research of already existing innovations the Lecturing birds how to fly effect.

According to his observation innovation often comes from the encounter with the real world, from the tinkering of professionals rather than from academic research.

Education does not make societies richer

We tend to think education makes a society rich, while often it is the other way around. Rich societies are investing more in education. Taleb brings Abu Dhabi as the prime example of his theory.

Abu Dhabi grew out of the desert with the help of oil. With the money acquired by the black gold, they invested heavily in education: built enormous university buildings, and hired teachers from the best schools.

Observing Abu Dhabi from the outside we could say that it is a rich city because of high-quality education, but this would be false empiricism.

"Serious empirical investigation (largely thanks to one Lant Pritchet, then a World Bank economist) shows no evidence that raising the general level of education raises income at the level of a country. But we know the opposite is true, that wealth leads to the rise of education—not an optical illusion.”

No action is the best action sometimes

The natural flow of things is often the best. Sometimes less regulation, more randomness, and procrastination are better.

Outsourcing the risk of antifragility

There are more and more examples today when individuals became antifragile at the expense of others. “Too big to fall companies” are bad for the economy because individuals pay the price in the form of taxes or inflation.

Similar to these companies but deeper with a layer we can find similar notions: in the level of management.

Taleb presents here the agency problem which states that if the decision maker can be hurt by his own decision then he is not properly incentivized to make the best decisions. In a case like this, the manager gets the upside and the rest of the company the downside of fragility.

Following the “in the past everything was better” schema the author brings an extreme example for proper incentivization which we can weigh against modern incentives like performance-based compensation:

"But bankers used to be subjected to Hammurabi’s rule. The tradition in Catalonia was to behead bankers in front of their own banks (bankers tended to skip town before failure was apparent, but that was the fate of at least one banker, Francesco Castello, in 1360)."

Outsourcing the risk of antifragility is present in our everyday life as well.

When a doctor prescribes medicine or suggests a treatment he has a small risk of being harmed if there are complications compared to the person who takes his advice.

The same rule applies to investments when we look at brokers and customers.

The Antifragile way of handling these asymmetries is realizing what they would do in our place / what they are investing in.

"The psychologist Gerd Gigerenzer has a simple heuristic. Never ask the doctor what you should do. Ask him what he would do if he were in your place. You would be surprised at the difference."

Not being dependent on money, looking down on luxury, and treating things as if we already lost them makes people more resilient toward the randomness of life.

Having less dependency also means more options for individuals. And options are a vector of antifragility.

“He is in debt, whether he borrowed from another person or from fortune.”

In a mature market or a well-described niche, everything comes with a cost.

There are no “one-time opportunities” or “magical cures”.

In the same way, as steroids have destructive effects on a body after its initial boost, similar notions can be observed in other areas of life.

“If there is something in nature you don’t understand, odds are it makes sense in a deeper way that is beyond your understanding.”

…and messing with nature’s rules has hidden consequences.

"... He had other options. And, it is worth repeating, options, any options, by allowing you more upside than downside, are vectors of antifragility."

“The effect, noted a while ago by the visionary researcher on extreme events Daniel Zajdenweber, seems to be accelerating. The economy can get more and more “efficient,” but fragility is causing the costs of errors to be higher."

"The world as a whole has never been richer, and it has never been more heavily in debt, living off borrowed money. The record shows that, for society, the richer we become, the harder it gets to live within our means. Abundance is harder for us to handle than scarcity."

"Recall that the most fragile is the predictive, what is built on the basis of predictability—in other words, those who underestimate Black Swans will eventually exit the population."

There are several observations of Nassim Taleb that I completely disagree with.

There are great ideas in Antifragile but it is hard to distinguish them from the author's partial opinion.

With some nature skepticism, this book can be a great read.

Antifragile: Things that Gain from Disorder