From many directions, the suggestion comes: commit yourself, specialize, deepen your knowledge in a narrow field as soon as possible or you'll be at a disadvantage. The stories of elite athletes are testimony to the effectiveness of early specialization.

Tiger Woods first picked up a golf club when he was six months old. By the age of two, he was touring national TV. He was just 16 when he made his adult debut at the highest level, at the Los Angeles Open.

Roger Federer has conquered a different sport than Tiger Woods, but the paths to the top of the game for the two greats could not be more different. For a long time, Federer did not commit himself to tennis. He tried several sports and seemed destined to become a football player.

When Roger Federer finally decided to play tennis at the age of 12, the time he spent playing football and other ball games did not seem like wasted time. Federer has also benefited from the basics of ball skills, coordination, and endurance, which he has acquired in many sports.

In defense of generalists

Not everyone wants to be a top athlete, world-class musician, or scientist. But nowadays, when there are eight sub-disciplines of every field, it is legitimate to ask:

When is it worth specializing?

The author of the book, David Epstein, before he started writing non-fiction books, studied in the Arctic how changes in plant life affect the realm of permafrost. After his Arctic adventure, he made a sharp switch to a journalist job at Sports Illustrated magazine, but also considered a possible career in sports.

Epstein's career path was seemingly full of unnecessary detours, but each stop was necessary to write with scientific rigor on a subject that also affected sport: specialization.

In his book Range: Why Generalists Triumph in a Specialized World, David Epstein reverses the popular assumption that the world is made for specialists.

I summarise below the main messages of the book Range. If you want to read the volume without spoilers, you should stop here.

If you stay with me, you'll learn that 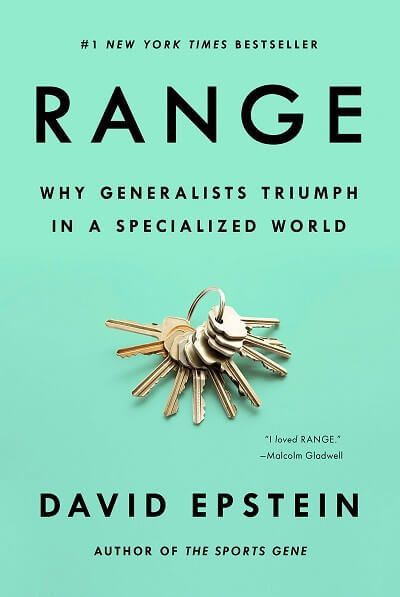 Why Generalists Triumph in a Specialized World

Six reasons to broaden your horizons

Over the years, Connolly has noticed an important difference between top performers: some have had no trouble leveraging their existing experience and achieving success in completely different fields, while others have stuck with being experts in a narrow field.

Connolly observed that the top performers who were able to achieve spectacular success after a career change were those who had received more general coaching at the start of their careers and left more opportunities open while immersed in their chosen field.

"They “traveled on an eight-lane highway, rather than down a single-lane one-way street. They had range." - writes Christopher Connolly

Research shows that after the simple hunter-gatherer lifestyle, the emergence of complex machines and the increase in complexity forced people to adapt. We have become accustomed to this new complex world, and a by-product of this has been a significant increase in the IQ of people worldwide.

Our exposure to the modern world has improved our approach to complex concepts, made us more flexible, and broadened the slice of the world we understand.

2. Specialisation as a barrier to innovation

Increasing specialization has created a 'parallel trench system' for innovation. Everyone digs deeper into their own trench and rarely looks up to see the next trench, even though the solution to the problem happens to be in the next trench.

3. The disadvantages of special education

In public education, students acquire a narrow vocational knowledge of a profession that they will never master, and the knowledge they acquire will not be applicable anywhere else.

Nobel laureates are at least twenty-two times more likely to be amateur actors, dancers, magicians, and other performers than ordinary people.

In other fields, respected scientists avoid the scrutiny of specialists by passionately cultivating their knowledge. And unusual perspectives often lead to unusual results.

5. If you have a hammer, everything is a nail

When David Epstein worked as a biologist, his colleagues included several volcanologists. Whatever problems Epstein's colleagues encountered, they usually came up with the "volcanic activity" excuse.

Meteors are out of the question.

In 1949, during the Mann Gulch fire in Montana, fire chief Wagner Dodge, when he saw the wildfire about to reach his men, shouted to the men to drop their tools and run.

Two did so immediately and sprinted to safety.

The others ran with their tools and were caught in the flames.

Thirteen firefighters lost their lives in the fire.

The victims of the Mann Gulch tragedy became one with their tools. They were firefighters, and leaving their equipment behind turned them into ordinary people.

They had a "hammer" in their hands that they could not let go of.

Most experts' predictions are not even close to reality, but what is extremely interesting is that research shows that expertise harms predictions.

In their book Superforecasting, Philip E. Tetlock and Dan Gardner write about the effectiveness of forecasts. They come to the interesting conclusion that experts in a narrow field perform particularly badly in making long-term forecasts in their field.

The accumulation of expertise, specialized knowledge, and credentials has a bad effect on experts' estimates of the future.

Tetlock's found a similarly strange inverse correlation between reputation and accuracy. Most of the time, expert predictions on TV and in newspapers never come true.

Psychologists have shown in several studies that the more information a person has available to make a decision, the more extreme the decision.

Match quality is what economists call a ratio that shows how well the work done by an individual matches the individual's abilities and aptitudes.

Research shows that it makes sense to choose a job with a high-quality match, but it is easy to get stuck when exploring the possibilities.

Sticking with a career/sport/hobby just to prove persistence tends to hurt the quality match.

Winston Churchill's popular phrase is often quoted to encourage perseverance, but it is precisely the point, the second half of the sentence, that is forgotten:

"except to convictions of honor and good sense"

Why are the most talented soldiers demobilized?

The prestigious US military academy, West Point, has been forced to find a solution to an interesting problem regarding the awarding of scholarships.

The academy's most talented cadets are demobilized as soon as the few years of their training contract expire. This was both a net loss to the state and they did not know the reason.

The solution lies in quality matching.

The more talented the army thought a prospective officer was, the more likely he was to be offered a scholarship. These talented young people became experts in their chosen field and, in the process, realized that countless opportunities were waiting for them outside the Army.

Eventually, they decided to try something different. They learned things about themselves in their twenties that helped them make better decisions.

We look back on our youthful goals and dreams as things that change, but we assume that we will never change again. We think we are complete individuals and our goals will not change in the future.

We are individuals in a state of continuous development, but we claim to be complete.

A generalist guide to effective learning

Many of us know prodigies who have lost their initial advantage over time. A child who reads at three is no longer interesting at ten because all his peers have learned to read.

It is worthwhile to forge a lasting advantage instead of a fleeting one.

Reading is not a permanent advantage.

Understanding what is read, pairing concepts, organizing, and applying the knowledge is permanent.

We learn who we are and what we like by doing.

To find activities and vocations that match in quality, we need to try them out.

The theory is not enough.

It is worth exploring, making mistakes, and learning from them. Not only in everyday life, but also at the career choice level.

If we viewed careers as dating, no one would commit so quickly.

4. The power of wrong answer

An answer to a problem, even a wrong answer, helps to learn. The point is to try to generate an answer.

Even Socrates knew what he was doing when he asked his students to formulate answers. Seeking answers requires the learner to sacrifice immediate performance to make his knowledge more useful in the future.

When patterns are repeated in an area, feedback is accurate and immediate, and boundaries are well defined, it is, in Robin Hogarth's words, a kind learning environment.

But there is also a completely different kind of learning environment.

This is the cruel environment.

In a cruel environment, the rules of the game are not clear, patterns sometimes occur, sometimes do not, feedback is delayed, imprecise, or both.

The higher the degree of uncertainty in an environment, the more likely it is to suit a generalist with a broad horizon.

6. The advantages of self-taught learning

I often overdo research. I read half the internet before taking up a new hobby. I don't want to waste time, I want the sure-fire tips and I want to get spectacular results as quickly as possible.

But experimenting, failing, and trying again can lead to unparalleled performance, according to David Epstein's stories.

Jack Cecchini is one of the few musicians who have cultivated both classical and jazz music on a world-class level. Cecchini can't read music, he's self-taught and his conversation with Epstein highlights the unheard benefits of self-taught learning:

"I’m not saying one way is the best, but now I get a lot of students from schools that are teaching jazz, and they all sound the same. They don’t seem to find their own voice. I think when you’re self-taught you experiment more, trying to find the same sound in different places, you learn how to solve problems.”

My opinion on Range by David Epstein

There is no sure-fire tip. You can't say unequivocally that you have a bright future as a specialist, just as generalists don't necessarily have an advantage. Yet pop culture and the literature are one-sided in their focus on specialists.

David Epstein presents a new perspective with relevant research and engaging stories. He doesn't try to convince us of anything, but merely outlines the unheard-of benefits of broad-minded and versatile people.

It is a readable book that I recommend to those facing a choice of direction, career changers, and readers unsure of their unusual backgrounds.

Why Generalists Triumph in a Specialized World