Johann Hari is not writing about some distant topic in his book. The writer of Lost Connections: Why You're Depressed and How to Find Hope has been fighting depression for decades. This personal touch makes him enthusiastic about finding the real causes of depression and researching potential remedies.

Lost Connections is a non-fiction book about a serious subject. Despite these, I felt like I was on a great journey when reading the book. The author collected several interesting stories while the book is packed with research findings.

In this summary, I am sharing with you the main takeaways of the book about depression, life, and as it turned out about connections.

The most common way of looking at depression is that it’s a brain dysfunction caused by a low serotonin level. To fix this malfunction you need pills to restore your brain chemistry.

This is the story the author got when he was diagnosed with depression. But pills did not work for him and do not work for a lot of people in the long term. It turned out serotonin levels alone can not answer the cause of depression.

Looking into the research of depression we can find that based on some mainstream schools, three fundamental aspects can be the root cause of mental disorders:

Serotonin levels and a malfunctioning brain do not answer every question and pills can not solve depression alone based on these findings. They are only focusing on the biological aspects.

And focusing on serotonin is a lie.

Giving someone an easy-to-understand story about why they are suffering can be powerful. Pointing at serotonin level as the cause of depression provides exactly that: your brain chemistry is out of balance, take these pills and it will fix you.

But Johann Hari takes away this easy-to-digest story and replaces it with a complex matrix, with life itself. He starts to do this by researching the scientific evidence behind the connection between serotonin and depression.

It turned out that there were experiments where scientists drugged people to affect their serotonin levels and watched what would happen. But they didn’t become depressed. Also increasing serotonin levels did not solve depression.

Serotonin didn’t affect their mood at all.

It turned out that there is no scientific evidence behind that depression is caused by low serotonin levels.

“It hasn’t been discredited, he said, because “it didn’t ever get ‘credited,’ in a sense.”

What Causes Depression Then?

The author presents several researchers of different fields all focusing on examining depression. He finds a common point between the work of all these independent scientists:

The causes of depression are all a form of disconnection.

The Causes of Depression

2. Disconnection from Other People

5. Disconnection from Status and Respect

6. Disconnection from the Natural World

7. Disconnection from a Hopeful or Secure Future

8-9. The Real Role of Genes and Brain Changes

“It is no measure of health to be well-adjusted to a sick society.” Jiddu Krishnamurti

The Remedies of Depression: Reconnections

Reconnection to Other People

“Don’t be yourself. Don’t fixate on how you’re worth it. It’s thinking about you, you, you that’s helped to make you feel so lousy. Don’t be you. Be us. Be we. Be part of the group.”

Reconnection to the Future

If you read any non-fiction book recently, you can not feel that in Lost Connections the author share with you some big secrets. If you put the bestselling non-fiction books for the last five years beside each other, you will get the topics John Hari is talking about in his book (meditation, reconnecting to nature, letting our ego shrink, the value of the tribe, bullshit jobs, universal basic income).

But he puts together these concepts as a way to fight anxiety and depression which idea was not occurring for me before. The stories he shares and the research he put behind this book are also extraordinary. I didn't feel like I am reading only an opinion, because most of the concepts were backed by research. Despite the vast amount of references, reading Lost Connections felt like I am on a journey.

I hope you enjoy it as well! 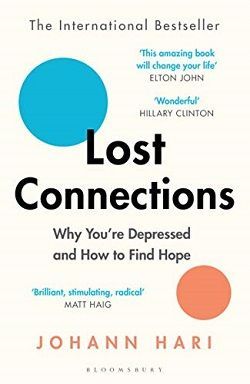 Why You’re Depressed and How to Find Hope