I am good at researching stuff, and coming up with conclusions but using these learnings to impact any decision whether that be in marketing or in life is not my strongest point.

As Chip & Dan Heath, the authors of Made to Stick explain, we are spending a significant amount of time getting the Answer, but compared to that we nearly don’t even think about how to present the outcome.

If we want to have an impact through what we do then both should be equally important.

Made to stick is an easy and interesting read on how to tell better stories. We got the characteristics of the best stories and a simple framework (or checklist) to construct our own compelling stories.

The authors introduce the SUCCES framework of good stories.

Based on the framework a story should be:

In this review of Made to Stick, we dive into the details of this story framework. If you would like to avoid spoilers and have the possibly best reading experience, then this is the place to stop. 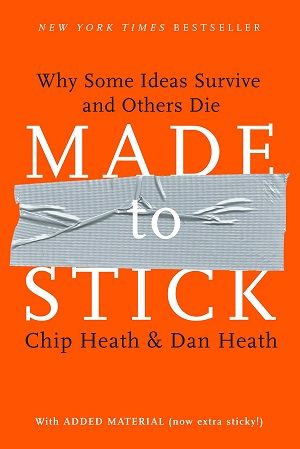 Made To Stick by Chip & Dan Heath

Why Some Ideas Survive and Others Die

Best Quotes from Made to Stick

"When it comes to statistics, our best advice is to use them as input, not output. Use them to make up your mind on an issue. Don’t make up your mind and then go looking for the numbers to support yourself—that’s asking for temptation and trouble."

Made To Stick by Chip & Dan Heath

Why Some Ideas Survive and Others Die