At university, I had a semester-long class about intercultural communication. We learned all the model's researchers come up with in the last 100 years, and we did exercises to practice avoiding miscommunication.

It was a well-thought-through class.

And I hated every minute of it.

I felt that we are trying to squeeze people and situations into predefined "cultural" buckets created by Hofstede and Edward T. Hall.

I had a completely different experience with Erin Meyer's book, The Culture Code.

Though the author is referring to the works of the above-mentioned gentlemen, she took a completely different approach than my class, when it comes to theory and its real-world application.

We got introduced to the world of cultural patterns through stories and the underlining theory comes only later as small snippets. Besides telling stories the cultural expert authors share best practices with us through the book.

I have the joy to work with diverse colleagues. They sometimes don't laugh at my jokes, but apart from that, I didn't feel the need to read a book about cultural differences.

After reading The Culture Map I started to pick up cues I was blind to notice before. I recognized situations through reading where I could do better. I think the book had an impact on the way I decode cultural patterns and how I approach differences in understanding.

By listening better and practicing the tips shared in the book I hope I can turn these insights into visible changes.

If you work with colleagues from different cultures, or if you had any awkward moments where you misunderstood what another person tried to tell you, then I highly recommend reading The Culture Map.

To give you a sneak peek I share below the top eight highlights that most resonated with me from the book. 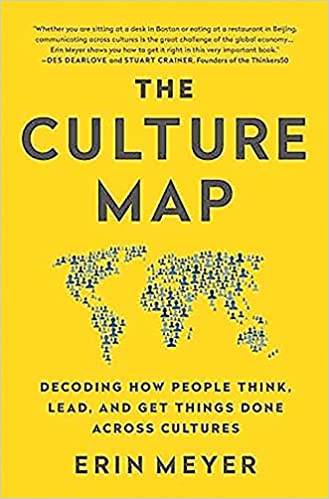 1. Focusing on the individual is not enough

The author is great at answering our unasked questions.

I was always a little bit skeptical of buckets, especially if they involve millions of people. I know that even within the same nation people can be drastically different.

I felt this through my own example and had some kind of proof of this with personality tests as well.

If even within one nation there are drastically different values and habits, how can we outline the universal characteristics of people living in the same country?

Erin Meyer answers this question in the following way:

"The culture sets a range, and within that range each individual makes a choice. It is not a question of culture or personality, but of culture and personality."

What I was overlooking before is that there are certain characteristics shaped by the history, religion, economy, or geographic characteristics of our country which makes us uniquely different from people growing up in a different country.

We can not disregard individual differences but we shouldn't ignore the range that culture sets either.

2. The most important scales of culture

What are the areas where culture can set a range?

Erin Meyer outlines eight cases and draws a scale with two outliers at each end and some countries listed between:

Even though we could believe that the way we communicate could determine the way we approach giving feedback, in practice it is a totally different category.

For example, people from the USA are communicating directly, but they are much more cautious when giving feedback. For the Evaluating scale, they are rather in the middle of the spectrum.

Again, we could think that leading style and decision-making are overlapped, but it is not the case in several cultures. For example in Japan leading is hierarchical but decision-making is consensual.

In The Culture Map, the author illustrates conflicts arising from the differences of each scale through stories.

3. Be a better listener

Regardless that we are interacting with someone from a low-context culture or with someone used to communicating by leaving cues all the time, being a better listener can help us anyway.

Erin Meyer brings an example from his childhood on how active listening is encouraged even in a low-context culture like the US:

Though Americans like to repeat their message several times to make it stick, listening to others and repeating their message can help us avoid misunderstandings.

Repeating what our partner said word-by-word is maybe not the most productive idea when it comes to decoding the messages of someone from a high-context culture.

As the following story illustrates:

"I once asked a French client, who was complaining about an incompetent team leader, whether he had described the problem to his boss. The client responded. "Well, yes, but it was a sous-entendu. I made it known so that he could see it if he wanted to see it."

Sometimes we need to read between the lines.

Listening should involve thinking as well.

4. Be cautious when giving feedback

Not everybody is wired the same way as we saw looking at the scales. Giving feedback - especially negative feedback - is tricky because of this.

Some strategies Erin Meyer shared in the book which make giving feedback a little less risky across cultures:

I always believed that there is no cooler boss than the one who is cycling to work and working in the trenches with his coworkers in a shared office space.

According to the insights of the leading scale, and the stories shared in the book, not everyone thinks this way.

In The Culture Map, we read about a successful Norwegian manager who is biking to work every day. It is nothing out of the ordinary since Norwegia is an egalitarian country, and biking to work like everyone else perfectly fits to the culture.

But when the same manager moves to China and brings his bicycle with him he faces serious challenges. In China, his team is ashamed that their boss is cycling to work like an average person.

He loses his authority in a hierarchical culture because of cycling to work.

So he retires his bicycle and took public transportation like every other manager in China.

The traits and habits of a strong leader could vary by egalitarian and hierarchical cultures.

Or as Erin Meyer puts it:

6. Are you a friend or a coworker?

In the former cognitive trust is dominating. I trust the other person because based on his past actions I believe he is capable of doing the job. My trust comes from my head. Relationships are built through business interactions.

In relationship-based societies, affective trust is dominating. I trust the other because I know that she/he is a good, reliable person. My trust comes from the heart. The relationship is built through personal interactions.

Even though I worked most of my life in task-based societies, the relationship between coworkers was newer than straightforward and most companies I worked with emphasized community as one of their most important values.

But is a coworker your friend or just a partner in crime?

The author suggests asking the following question after a team member of yours was fired to determine the answer:

"Will you continue your relationship with the person who has been fired even though he is no longer part of your company? "

Responses can vary in different cultures.

In The Culture Map, we can find several easy-to-visualized concepts.

Categorizing cultures as peach or coconut cultures is one of these.

In peach cultures, people are warm and welcoming even without any previous relationship. They are smiling and offer compliments upon starting the relationship.

Though people from peach cultures look friendly, getting the trust and really getting to know someone from a peach culture requires effort. After the initial soft layer, you have to break the peach kernel, which is trickier than it sounds.

On the other hand, people from coconut cultures are starting with less welcoming gestures. They rarely smile at unknown people, don't chitchat, and barely ask or answer questions about their personal lives.

8. Waiting in line in different countries

I was surprised that differences in our relationship to time are often influenced so much by culture.

Doing one thing after another. Waiting in line. Creating plans and timetables looked like a universal trait of productivity to me earlier, but this is also rather a trait shaped by our cultural inheritance.

The different perspectives on time maybe are the most visible when it comes to waiting in line.

In countries with stable histories, like Sweden, cutting the line and disobeying the undeclared rules of waiting is considered rudeness and can get us in trouble.

On the other hand in countries where a strong organizing power/state was not always present through the ages, people had to rely much more on themself. They have a different approach to time as well.

For example in India, there is no one line but rather an "evergreen tree".

When a line needs to be formed some people surround the goalpost and people accumulate behind them. When the lines look too long, people start their own by standing beside the other lines.

Summary of The Culture Map

Erin Meyer's The Culture Map examines the range of cultural differences in communication, leadership, decision-making, and giving feedback. Cultures are discussed, with conclusions of direct or indirect feedback, hierarchical and egalitarian leadership, and high or low context communication.

Meyer outlines eight cases with two outliers and some in-between, highlighting that culture and personality both matter when it comes to understanding different people.

Some takeaways from The Culture Map

• Culture can influence the way we communicate, lead, decide and evaluate

• Examples of leading styles include hierarchical and egalitarian

• Feedback can be given in an indirect or direct way

• Communication can be high or low context

• Culture sets a range and within that individuals can make choices