The Richest Man in Babylon is one of the most impactful books about personal finance. It's a good introduction to the timeless wisdom of managing our assets.

Babylon had three valuable resources: fertile land, the water of rivers, and its talented inhabitants. The richest city in the ancient world had no mines, forests, and did not lay at the intersection of trade routes. Yet the Babylonians created the richest city of their time, though many cities with more favorable geographical conditions could have competed for the title.

The richest man in Babylon is a guide to financial awareness.

The short stories in the book are related only in their subject and place. George Samuel Clason’s book is about hard work, savings, compound interest, and the secrets of the “fat wallet”.

In this article, I summarize the main cornerstones of the book. If you haven’t read it yet and don’t want to ruin the reading experience by learning the details, stop here. 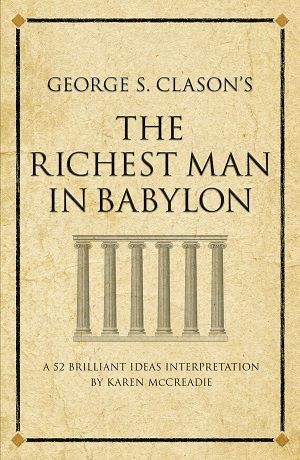 The Richest Man in Babylon

The Richest Man in Babylon Summary

What kind of advice can offer the stories of a lost civilization? After all, self-driving cars, artificial intelligence, and a completely transformed world would be waiting for the camel dealer coming out of the book.

Are the truths described in the book still applicable today?

We also get some answers to our legitimate questions while flipping through the first few pages of The Richest Man in Babylon.

A similar question arose in the minds of the Babylonians when they saw the wealthy old man.

Why take the advice of an old man, since he acquired his fortune at a different time, under different circumstances?

However, a common characteristic emerges again and again among the wealthy characters in the tales: they have consciously sought the advice of wise men.

As Algemis, the narrator of one of the stories, accumulates considerable wealth, says:

The wisdom of the age is like the pole star for the sailor.

The narrators do not formulate specific tips or strategies in the stories. (If you prefer something like this, you should take The Millionaire Fastlane in hand.)

The short stories offer timeless, still applicable lessons. The format of the book makes it particularly easy to read, and thanks to the examples, it also captures what is being said.

The man who longed for gold

Most of the stories (and the title of the book) are related to the richest man in Babylon, Arkad. As a simple writer, Arkad was dissatisfied with his position. He worked hard, yet he did not become rich.

They looked for reasons for their failure with a musician’s friend.

By the end of the conversation, a new goal had crystallized in Arkadas: he wanted to learn the laws of making money. The young scribe sought the advice of one of the richest men of his age, who was happy to pass on his knowledge.

By accepting the advice he received, making many mistakes, and then learning from his shortcomings, Arkad became the richest man in Babylon by his old age.

The king of Babylon was concerned about the misery of the crowds and the fact that the wealth of the city was concentrated in the hands of only a few wealthy people. To remedy the situation, he asked Arkad to pass on his knowledge to the masses.

The richest man in Babylon trained teachers whose tips on money were summarized in seven laws.

Seven remedies for your slim wallet

For every 10 gold, you earn, set aside for yourself a gold penny.

Although today it is unlikely that we will receive our salary in gold, the message is still understandable:

In the word of Arcade, this penny will then become your servant and it will produce more gold.

Even in ancient Babylon, many lived more luxurious lives than they could have afforded. Savings and subsequent profits seemed out of reach for many, instead of paying their wasteful lifestyles with loans in the present.

Arcade’s tips are based on the first point, so it’s important that we can set aside 10% of our revenue.

Setting aside is just the beginning.

Invest with your savings as their real power is in the interest.

4. Protect your property, don't lose it

Arkad, after constantly setting aside a tenth of his salary for a year, decided to invest his savings. A friend of a merchant persuaded him to support his journey to Phenicia, where he bought gems cheaply, which were later sold in Babylon for hopeful gain. The friend came back with worthless stones and swam away a year of Arcade's savings.

The penalty for risk is the likely loss.

Find out the advice of the experts before taking the plunge!

5. Make your home an investment

Own your house and treat it as if it were an investment.

6. Secure your earnings for the future

Take precautions before the time comes that you will earn less or die.

"Your investments to secure the future must be as secure as the king's throne."

The wiser we are, the more we can earn. In addition to increasing your knowledge, you need another very important quality to increase your revenue-generating ability: self-confidence.

You have to believe that you deserve that certain raise.

How to be lucky?

During the seminars of the richest man in Babylon, several topics came up again and again. One such important issue was luck.

In response to the audience's stories and based on his own experience, Arkad gives the following advice on luck:

Advice from the richest man in Babylon

Through years of hard work, Arcad became the richest man in Babylon. When the time came to take care of the fate of his estate after his death, he decided to take a unique step.

Since he managed to enhance his own wallet to a considerable size after many attempts, failures, and then another attempt, he did not want to entrust the family fortune to his inexperienced son.

Instead, he challenged his son to learn how to get, keep, and raise money.

The boy received a bag of gold and 5 rules engraved on stone tablets. Under the deal, he left Babylon, and in 10 years he had to make money with the sack of gold and the five laws. If he fails to complete the task, Arcad donates his property to the priest.

The five laws of gold:

Although the boy lost a bag of gold from his father, adhering to the rules, he was still able to earn multiples of the amount received in 10 years.

Returning to the father’s house, in addition to returning the bag of gold, he also paid multiples of the amount received for the stone tablet, as he considered the advice to be much more valuable than the money.

The rest of the book provides examples of the practical application of the advice already described. We can read about the advice of snackers, the differences in perspectives between slavery and free people, the reward of honest work.

In closing, the author explains the secret of Babylon’s wealth and the reasons for its fall.

My opinion about The Richest Man in Babylon

Simple, easy-to-digest stories spark financial awareness. But to what extent can these tips be applied today? The secret of Babylon’s success (as the author writes in the last chapter) was innovation. They were always able to adapt to the situation. If the ability to adapt is seen as the secret to the success of the Babylonians, thousands of years of advice will lose some of its meaning due to changes in the environment.

Let’s set aside a portion of our revenue. Let's invest it. We increase our ability to generate revenue. These rules are repeated by most personal finance gurus and they are still relevant today.

Buying a home? Insurance? This is a much more nuanced multivariate equation. Where is it worth buying an apartment, if it is worth it at all? What could be an investment-worthy of the stability of the king’s throne today?

The richest man in Babylon is a guide to financial awareness. Not a get-rich-quick book, in fact.

Even in ancient Babylon, the characters in the tales became wealthy over many years. So let’s deal with the advice in place.

If we keep these aspects in mind and don’t expect more from the book than it is, we can honor one of the best books on the subject in George Samuel Clason’s book.

The Richest Man in Babylon