Bill Walsh was the head coach and general manager of the San Fransisco 49ers American football team. He took over the 49ers as one of the worst teams in American football history and transformed the whole organization into a system that resulted in three Super Bowls (1981, 1984, 1988) and made the 49ers the best NFL team of the 1980s.

Steve Jamison, the author of several best-selling leadership books, approached Walsh after his prime with the 49ers to document his leadership philosophy and principles which made his spectacular results possible.

They started to work on The Score Takes Care of Itself during a time when Bill Walsh was already holding popular seminars about leadership at Stanford Graduate School of Business. The cooperation stopped with Welsh’s comeback to NFL and the book never got finished in his lifetime.

After Walsh passed away Jamison and Welsh’s son, Craig finished the work they started years earlier. The book was published after 2007 but largely in Welsh’s words.

The Score Takes Care of Itself is the personal map for success for one of the most creative and successful NFL coaches whether in professional football or anywhere else. It’s not just about leadership, efficiency, and processes. It’s about how to treat people right and how to build a culture where results can be accomplished as a byproduct.

Bill Walsh is not just writing about values and ways of working. He implemented his principles and succeeded with it in one of the most competitive leagues on the planet.

I find The Score Takes Care of Itself as one of the most practical books about how to accomplish great things without giving up our values.

If you find the book interesting based on this short intro and want to read it, then I suggest you stop here. In the following part of the summary, I share lists, bits of advice, and principles. These are however invaluable but can ruin the reading experience if you have not read the book yet. 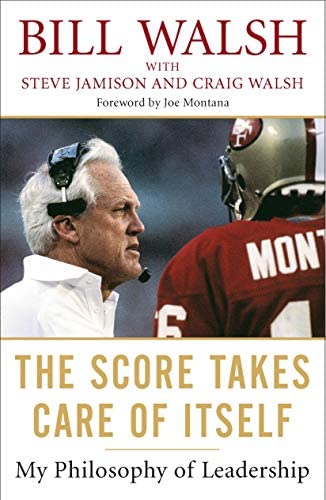 The Score Takes Care of Itself by Bill Walsh

My Philosophy of Leadership

Lists are the road to success

Bill Walsh had lists for everything which was part of the way he simplified complex processes into easy-to-digest actionable to-dos. In the book, we can read about his most important lists like his famous Standard of Performance or character traits he was looking for in a player.

I attach the lists without modification:

There is a continuous up and down nature of competitive sports. Especially early on it is hard to justify the invested work when the results are not favorable.

Bill Walsh solved this challenge by introducing the Standard of Performance, a point of reference, a solid ground the team could fall back on.

Focusing on these principles instead of the outcome the 49ers could play every match as business as usual instead of try-hard battles. The Standard of Performance made it possible for the 49ers to win the bigger games.

Here is the list of values and believes which guided the work of Bill Walsh with the 49ers:

The Five Don’ts of Bill Walsh:

Hardships are part of every road worth taking.

Besides the Standard of Performance, Bill Walsh had a list to overcome adversities, beat victim mentality and do great work no matter the circumstances.

There are several lessons we can learn from The Score Takes Care of Itself. Here is the list of thoughts that had a great influence on me and potentially can be valuable to you:

However, The Score Takes Care of Itself was published with the subtitle “My Philosophy of Leadership” I get so much more out of this book than some leadership lessons.

I learned why it is worth thinking deeply about designing effective systems. I read about how to strive for more without sacrificing the present, and how to stay true to my values no matter the short-term downsides.

I strongly recommend reading The Score Takes Care of Itself by Bill Walsh.

The Score Takes Care of Itself by Bill Walsh

My Philosophy of Leadership