Historian Yuval Noah Harari's bestselling books on the past and the future (such as Sapiens) have been gained popularity in recent years. These are intellectually stimulating, contextual, and far-reaching books that move away from known research and certain theories and towards the end of the series turn into predictions.

I have loved every page of Harari's books, but I have no idea whether his predictions will work. I was therefore particularly surprised when I picked up The Sovereign Individual, a book closely related to the style and theme of Harari's books, and also peppered with fortune-telling.

The book was written in 1999, so we see the realization of several ideas that were unthinkable at the time. Some of the ideas put down on paper thirty years ago are scenarios that occur with frightening accuracy.

Peter Thiel, the co-founder of PayPal, has described Sovereign Individual: how to survive and thrive during the collapse of the welfare state as the most influential book ever written.

Unpacking deep and unique ideas like Harari's, and analyzing the past as part of the system, is well worth a read.

The theme of the book is a new revolution that will disconnect the individual from the nation-state in the 21st century.

In this book, you will read about

James Dale Davidson is an American investor and financial writer. His co-author William Rees-Mogg is a former editor of The Times. Their unique ideas are presented clearly and their reasoning is based on the theories of other thinkers.

In total, we can distinguish three major economic eras/societies throughout history:

If you want to read the book without spoilers, you should stop here! Below I summarise and add highlights about the ideas in the book that had the greatest impact on me. 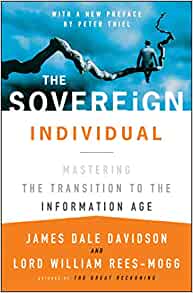 "Technology is precipitating a revolution in the exercise of power that will destroy the nation-state just as assuredly as gunpowder weapons and the printing press destroyed the monopoly of the medieval Church."

We can only imagine the power the church once had. It has influenced areas of life that still affect us hundreds of years later. Take the ban on eating meat on Fridays and the reasons for it:

"The famous ban on eating meat on Friday originated in the same spirit. The Church was not only the largest feudal landholder; it also held major fisheries. Church Fathers discovered a theological necessity for the pious to eat fish, which not incidentally ensured a demand for their product at a time when transport and sanitary conditions discouraged fish consumption."

"Institutions of government that emerged in the modern period reflect the megapolitical conditions of one or more centuries ago.The Information Age will require new mechanisms of representation to avoid chronic dysfunction and even social collapse."

Privatization and the end of governments

"We expect to see a radical restructuring of the nature of sovereignty and the virtual death of politics before the transition is over instead of state domination and control of resources, you are destined to see the privatization of almost all services governments now provide."

There are already examples of privatisation for economic reasons:

"No government has made a specific decision to move out of some policing tasks, nor indeed, have any moved out; the private sector has moved in."

Customers instead of citizens

"The Sovereign Individual of the new millennium will no longer be an asset of the state, a de facto item on the treasury's balance sheet. After the transition of the year 2000, denationalized citizens will no longer be citizens at all, but customers."

"The commercialization of sovereignty will make the terms and conditions of citizenship in the nation-state as dated as chivalric oaths seemed after the collapse of feudalism."

"An old Chinese folk wisdom holds, "Of all the thirty-six ways to get out of trouble, the best way is-leave." In the Information Age, that Oriental wisdom will be easily applied."

The book assumes that the wealthy will see citizenship as a burden, especially for heavily taxed citizens of developed countries. It will simply become possible to buy basic citizenship rights. For example, a US citizen can buy citizenship in Switzerland for $40,000, for example, without any additional tax liability.

Have we seen this before?

The Rise of Knowledge

"For the first time, those who can educate themselves will be almost entirely free to invent their own work and realize the full benefits of their own productivity. Genius will be unleashed, freed from both the oppression of government and the drags of racial and ethnic prejudice."

"In an environment where the greatest source of wealth will be the ideas you have in your head rather than physical capital alone, anyone who thinks clearly will potentially be rich."

The fall of the Middle Class

"Equally, the opportunities for middle skills are falling; a substantial number of low skills now fall outside the range that is rewarded with a comfortable living, though they may still find a place in small-scale services."

"Information technology exposes people working in formerly protected service sectors to foreign competition. If a firm in Toronto wished to hire a bookkeeper twenty years ago, that person had to be physically located in Toronto, or in a nearby community within commuting distance. In the Information Age, a bookkeeper in Budapest or Bangalore, India, could do the job, and download all the material needed in encrypted form over the Internet."

"As information technology improves by a magnitude or more every eighteen months (Moore's Law), ever-greater numbers of service-sector workers will be exposed to price competition that is essentially beyond the capacity of politicians to impede."

"Information technology is making it plain that the problem faced by persons of low skill is not that their productive capacities are being unfairly taken advantage of; but rather the fear that they may lack the ability to make a real economic contribution."

The Rise of the Internet

1. The Internet is only a Catalogue

"The most primitive manifestations of the Information Age involve the Net simply as an information medium to facilitate what are otherwise ordinary industrial-era transactions. At this point, the Net is no more than an exotic delivery system for catalogues. Virtual Vineyards, for example, one of the first cybermerchants, simply sells wine from a page on the World Wide Web."

2. Adding New Functions to the Internet

"An intermediate stage of Internet commerce will employ information technology in ways that would have been impossible in the industrial era, such as in long-distance accounting or medical diagnosis."

"The second stage of Net commerce will still function within the old institutional framework, employing national currencies and submitting to the jurisdiction of nation-states."

3. Moving to the Cyberspace

"A more advanced stage will mark the transition to true cybercommerce. Not only will transactions occur over the Net, but they will migrate outside the jurisdiction of nation-states. Payment will be rendered in cyber-currency."

"Profits will be booked in cyberbanks. Investments will be made in cyberbrokerages. Many transactions will not be subject to taxation. At this stage, cybercommerce will begin to have significant megapolitical consequences of the kind we have already outlined."

The internet, still in its first phase at the time of the writing this book, has not only entered the promised second phase, but is now pushing the boundaries of cyberspace.

Think of cross-border payments and 'internet banks', which, while still obliged to comply with nation-state regulations, could in fact operate without states.

"If you are interested in chess above all else, or are a keen ca fancier, you will be able to program your evening news broadcast to feature information important to you about cats or chess."

We could go on, but I think we have got the gist. The authors' 1999 prediction has come true with frightening accuracy in the first half of the 21st century.

"Global computer links will not bring back Latin as a universal language, but they will help shift commerce out of local dialects, like French in Quebec, into the new global language of the Internet and World Wide Web-the language that Otis Redding and Tina Turner taught the world, the language of rock and roll, English."

The Independence of Education

"In the Information Age, education will be privatized and individualized. It will no longer be lumbered with the heavy political baggage that characterized education during the industrial period. Nationalism will not be constantly massaged into every corner of the mind's life."

In the light of Sovereign Individual's predictions, the rise in popularity of online and cohort-based courses is not so surprising.

"The fastest-growing and most important new economy of the next century will not be China but the cybereconomy. To take full advantage of it, you will need to place your business or profession on the World Wide Web."

"Cognitive skills will be rewarded as never before. It will be more important to think clearly, as ideas will become a form of wealth."

...and one more prediction at the end:

"Travel could be effectively discouraged by biological warfare, such as the outbreak of a deadly epidemic. This could not only discourage the desire to travel, it could also give jurisdictions throughout the globe an excuse to seal their borders and limit immigration."