In reading the book, you will learn how the game called life is worth playing and what are the greatest myths of existence. You will find surprisingly deep reflections on religion, patriotism, love, and culture.

James Carse, professor of history and religious studies at New York University, came up with an unusual idea after a seminar on game theory: what if he applied the principles of game theory to his own field?

The result is a philosophical work that is not afraid to describe the life and human relationships in terms of definite rules.

The book, which flits between different disciplines and eras, is treated in a similarly untamed form in this summary.

If on the basis of the introduction, you find James Carse's Finite and Infinite Games interesting and don't want to spoil your reading experience, then this is the place to stop. 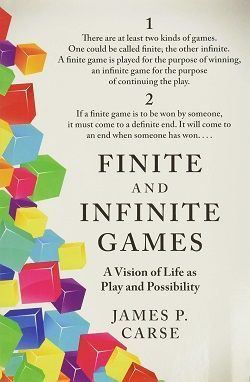 A Vision of Life as Play and Possibility

What Finite and Infinite Games looks like in 100 words

The two kinds of game

Finite games are characterized by externally defined rules. These limits are predefined and players can compete to win within these limits. An example of a finite game is a chess game, a football match, or a job interview.

In contrast, infinite games follow internally defined rules. While a job interview is a finite game, our career is an infinite game. We make the rules we want to follow and the goal of a career does not end with getting or not getting a job.

The goal is to stay in the game.

Every game is a social game

If the game is forced on us, we cannot play, we cannot talk about a game. Regardless of finite and infinite play, there is one compulsory element of play: partners.

We cannot play alone, so we have to find opponents or teammates willing to join the game.

Finite games are played for titles and ranks. But the titles and ranks are for others, they are a sign to others that we are the winners of the game. Ranks need an audience, without them they are worthless.

Titles have a similar power dynamic.

Power only makes sense in relation to others.

Life as a game

The finite game player plays to live, not lives to play. That is why the finite player earns, possesses, wins life, but does not live it.

In contrast, the player of the infinite game lives the game. For him the game does not end in death, he merely offers his life in order to continue the game. The infinite player does not play for his life but lives to play.

Interpretations of passing away

There are two different interpretations of death: one can be dead during life, while another can be alive after death. It depends on which game you are playing.

The finite game generally focuses on the past. What has it achieved, where did it come from, what are its titles? In contrast, the infinite game is future-focused. New possibilities open up as the game continues, independent of the past.

Death in the endless game is the end of the game. The player no longer competes, no longer fights for titles, accepts the role of the defeated. In the infinite game, death is an achievement, a spiritual victory. The Sufi "Die before you die" (or even the Stoic memento mori) fits well into the philosophy of the infinite game player.

Learn with and instead of training!

On nations and nationalism

The only hope for the Earth

James Carse says it is an evil idea for a nation to think of itself as the last and only hope for the Earth. We have seen the devastating results of this idea through the actions of the Nazis.

This is why the rhetoric of 'everyone is bad, everyone is the enemy, we are the only perfect ones', which is still increasingly being used today, is dangerous.

To defend society (by increasing the power exercised over society) requires an enemy. Without an enemy there is no patriotism, no legitimate mandate to centralize power.

Since without threats, there are no ranks, titles, or awards, patriots must create an enemy before society can need the patriots' help.

No state without an enemy

War is not unlimited destruction, but a competition between states and nations, a finite game. A state without enemies has no borders, and a state with borders naturally has enemies.

The most powerful myth of culture

No culture is stronger than its strongest myth.

The greatest promise of the Soviet Union, and of communism in general, was the extension of equality and relative prosperity to the masses, as opposed to exploitative capitalism. This myth was used by communists to drive out the kulaks, redistribute wealth and implement seemingly illogical plans.

However, the most powerful myth of communism could not live up to the promises of its greatest ideological rival. The myth became an empty promise and its followers turned to other ideologies.

Storytelling as a way of stimulating reflection

Storytelling can itself be an endless game.

The narrator's story is not an attempt to convince his audience of anything. It does not offer important answers, its words do not cross borders. A story doesn't even have to be true, it just has to describe a vision or plant a seed of thought in our minds.

Storytelling is not competitive. You cannot fail or win with a good story.

Rather than proving his or her knowledge and awareness, the storyteller encourages his or her audience to turn from knowledge to thinking.

If we can't tell it, it never happened

"If you didn't post a picture from the gym, you didn't exercise" is a popular way of saying that if we can't tell the story of what happened to us, then nothing really happened.